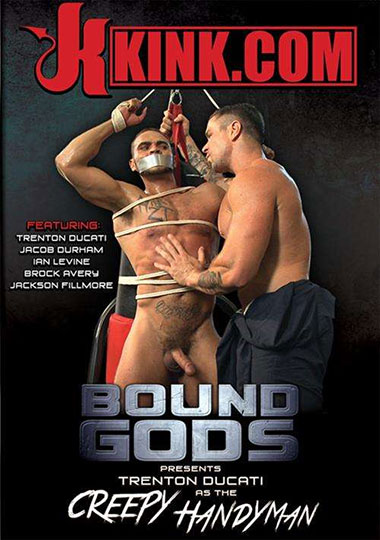 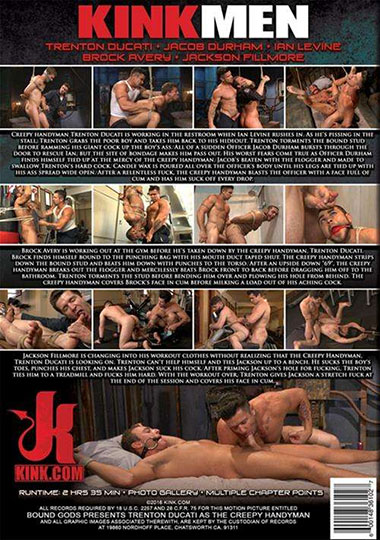 Description:
Creepy Handyman Trenton Ducati is working in the restroom when Ian Levine rushes in. As he’s pissing in the stall, Trenton grabs the poor boy and takes him back to his hideout. Trenton torments the bound stud before ramming his giant cock up the boy’s ass. All of a sudden Officer Jacon Durham bursts through the door to rescue Ian, but the site of bondage makes him pass out. His worst fears come true as Officer Durham finds himself tied up at the mercy of the Creepy Handyman. Jacob’s beaten with the flogger and made to swallow Trenton’s hard cock. Candle wax is poured all over the officer’s body until his legs are tied up with his ass spread wide open. After a relentless fuck, the Creepy Handyman blasts the officer’s face full of cum and has him suck off every drop.
Brock Avery is working out at the gym before he’s taken down by the Creepy Handyman, Trenton Ducati. Brock finds himself bound to the punching bag with his mouth duct taped shut. The Creepy Handyman strips down the bound stud and beats him down with punches to the torso. After an upside down “69”, the Creepy Handyman breaks out the flogger and mercilessly beats Brock front to back before dragging him off to the bathroom. Trenton torments the stud before bending him over and plowing his hole from behind. The Creepy Handyman covers Brock’s face in cum before milking a load out of his aching cock.
Jackson Fillmore is changing into his workout clothes without realizing that the Creepy Handyman, Trenton Ducati is looking on. Trenton can’t help himself and ties Jackson up to a bench. He sucks the boy’s toes, punches his chest, and makes Jackson suck his cock. After priming Jackson’s hole for fucking, Trenton ties him to a treadmill and fucks him hard. With the workout over, Trenton gives Jackson a stretch fuck at the end of the session and covers his face in cum.