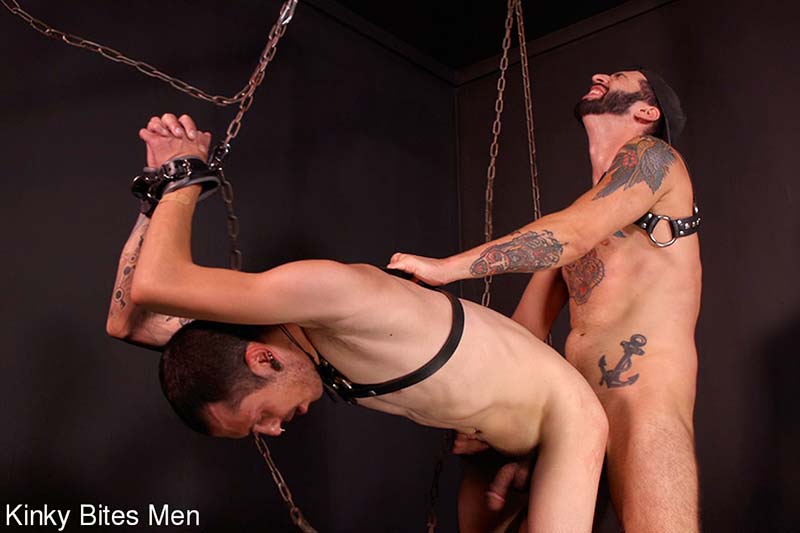 Description:
Wearing only a blindfold, a gag, and tight underwear, Silas Everwood stands with his arms raised, shackled to a spreader bar above his head. Tattooed tough-guy Romeo Davis steps into frame and puts his hands on Silas, he slaps and grabs at his body. Romeo gets a chain that has a nipple clamp at each end, and puts them on Silas’ nipples. Romeo pulls on the chain and Silas screams. Romeo turns him around and slaps his ass but Silas tells him to do it harder. Romeo slaps his ass till it turns pink. He stands up and gets behind Silas. He presses his hard dick against Silas’ ass, reaches around and pulls out Silas’ cock. He spits on his cock and strokes it for his own enjoyment. He tells Silas that he is not allowed to cum. Romeo squats down, puts a pump on Silas’ cock and gets it hard with the suction. In the next scene, Silas is bent over forwards, balanced on one foot while the other is cuffed and chained to the ceiling. He holds himself up with his arms that are cuffed and chained above his head. Romeo steps in, unbuttons his tight denim shorts and whips out his big fat uncut hog. He shoves it in Silas’ mouth and Silas does his best to get that girthy dick down his throat. Romeo liberates one of Silas’ legs and spreads his ass. He shoves his meaty member inside Silas’ tight ass and fucks him raw and hard.