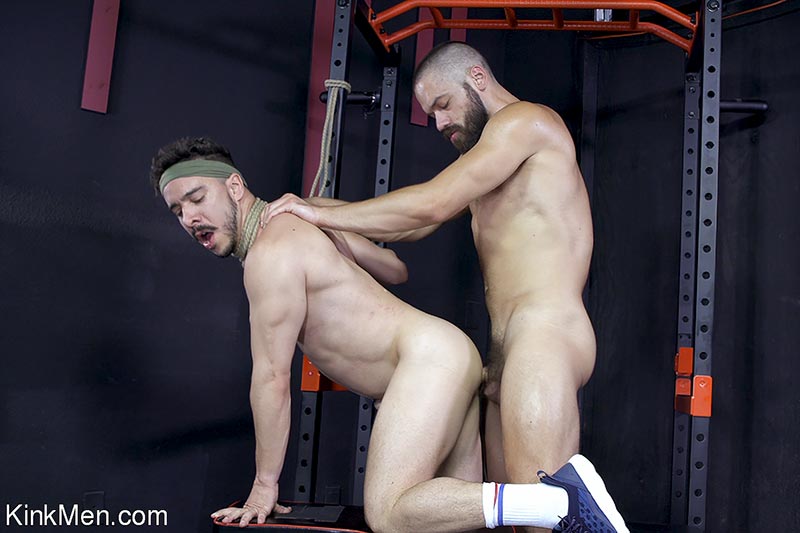 Description:
First time kinksters Alessio Vega and Jack Beam get down and dirty, sweaty and kinky in this sports fetish shoot where ripe jock straps and hot, seasoned jock meat are all the rage. After Alessio the jock insults Jack in the locker room Mr. Beam takes him down, ties him to a weight rack and teaches him a lesson about what’s what. With a hard shell jock strap on Vega’s face like a mask Jack gets his fetish on by sniffing Alessio’s pits and ripe jock strap. Mmmm smells so good he just has to get that cock in his mouth. Jack devours Alessio’s jock cock and takes him to the edge over and over with his mouth, hand and the gripping tightness of the flesh light. It drives Alessio wild but he doesn’t want to like it because Jack is a “sick fuck” making him go through all this. Out comes the flogger and Jack whips the hell out of his bound jock boy’s butt, stomach and chest. All that flogging gets Alessio warmed up for what’s next which is a massive dildo up his ass. Mr. Beam eats Alessio’s sweaty jock hole out and then reams Vega’s ass with a thick dick and it’s overwhelming but he takes it like a champ. With Vega’s neck tied to the weight rack and in doggie Jack face fucks Alessio with his big cock and Jack loves it. Vega knows how to suck dick and its’ getting him turned on so after some sexy deep throat action Jack Beam stuffs Vega’s slutty hole with his cock and pounds him out until he squirts a huge load all over sporto’s face. Of course Alessio just has to cum after getting fucked like that so being the nice guy that he is Jack lets him jerk off and pop his load. Whew what a work out!