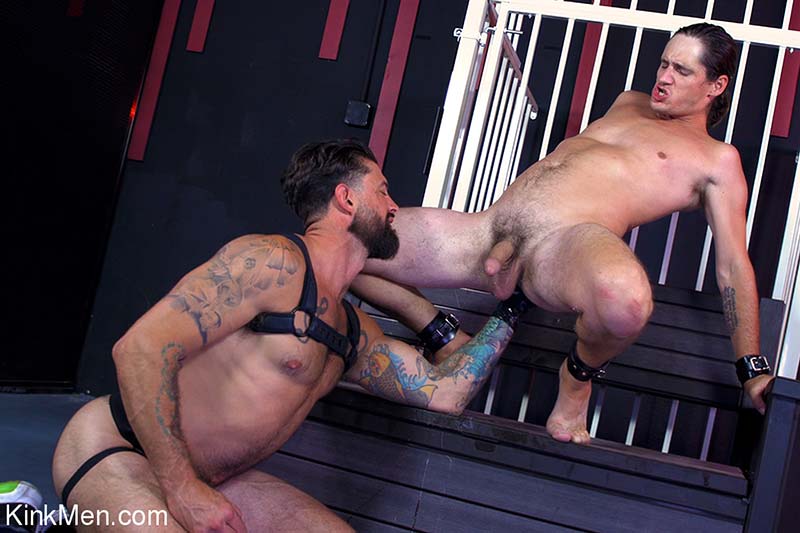 Description:
Alpha Wolfe gets a call. Another “sissy-boy” has been delivered and is ready and waiting in his secret lair. Alpha throws on his blue blazer and bolts to his underground playground of pain. Tony Orlando is standing there, wearing only tight latex underwear. He’s strapped to a cage with leather wrist cuffs. A black hood hangs over is head. Alpha roughs him up, slapping Orlando’s bare skin. He puts suction devices on Orlando’s nipples and pulls them hard. He takes his hood off, and the long-haired Orlando has a bit-gag in his mouth. He slaps Orlando with a leather paddle until his skin turns pink. He puts a tight black latex hood over Orlando’s head, gets him to his knees, and applies a ball-spreading device around his balls making them ache and turn purple. Alpha puts clothespins across Orlando’s nipples and hits him with his leather crop. In the next scene, Alpha bends Orlando over and shoves his fat cock inside his ass and fucks him deep and hard. Orlando enjoys it a little too much so Alpha gets a huge toy and makes Orlando sit on it. He sits on the toy with ease and takes almost the whole thing up his ass and fucks himself with it. After that, Orlando begs for Alpha’s fist and Alpha shoves his entire fist inside Orlando’s ass.