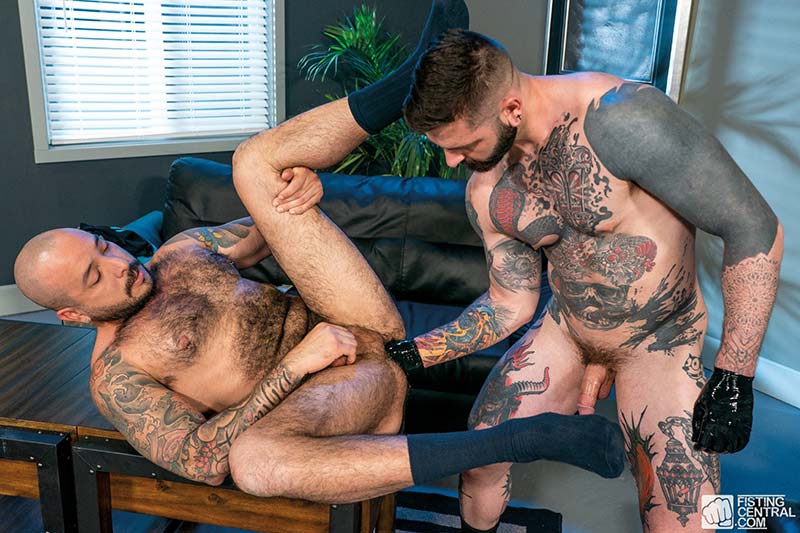 Description:
Julian Torres is jacking his thick, uncut dick in the employee break room when his boss, Teddy Bryce, catches him in the act. Teddy isn’t happy with what he just found but decides that if Julian wants to act like the office slut, then that’s how he’ll be treated. Teddy needs a taste of Julian’s engorged cock and bends down to suck the hairy hunk. Teddy gags on the big dick before he tells Julian to bend over. He can hardly resist rimming such a nice hairy ass and goes in with his tongue to really open Julian up. It’s a great start, but Julian needs way more from his boss. He gets down on his knees to worship Teddy’s giant cock getting him rock-hard, so he can slide his pole deep into Julian’s hole. Teddy pounds away, filling Julian with as much dick as he can handle. When Teddy takes another look at Julian’s gaping hole, he realizes that Julian can take a whole lot more. Confirming his suspicions, Teddy slides his fist into the hairy hole in front of him stretching it as far as it will go as he alternates hands, going wrist-deep. Julian grunts and groans with each thrust inside, begging for more every time Teddy pulls out. Julian pushes out his rosebud before he gets on his back for some extreme eye contact as Teddy finishes up by fist-fucking his subordinate as fast as he can. One final thrust sends Julian over the edge and he blasts a creamy load all over his hairy stomach.