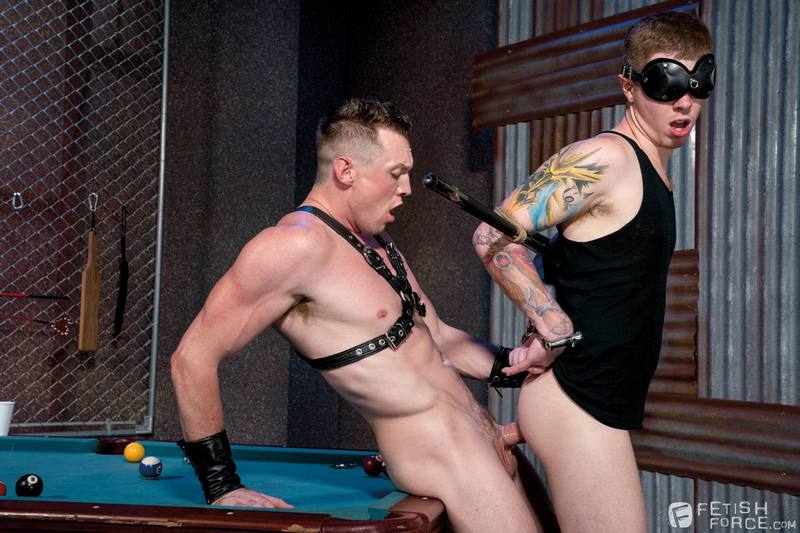 Pierce Paris spots Lain Kross sitting at ‘The Fetish Bar’ and likes what he sees. Lain notices Pierce checking him out from across the bar and decides to join Pierce to shoot some balls on the pool table. Lain gets more than a friendly game of pool when Pierce blindfolds him and cuffs his hands behind his back. Lain submits to Pierce’s desires and offers up his body for Pierce to use at his own free will. Pierce gets on his knees and sucks Lain’s growing cock until he’s ready to open up Lain’s ass. Pierce gets in deep with his tongue and gets the stranger from the bar ready for his giant dick. Lain has no idea what he’s in for until he feels Pierce slide his monster deep between his cheeks. Pierce pumps away with a steady pace going deep inside the new hole. Pierce’s massive balls bang on Lain’s ass with every thrust from the muscle daddy. After fucking the hunk hard, Pierce decides Lain has been a good hole and needs a reward. He takes Lain out of his restraints and lets him suck on his big cock. Pierce’s shaft sliding in and out of his mouth makes Lain blow his load all over the floor. Lain really needs Pierce’s load, but Pierce isn’t ready to give it up just yet.