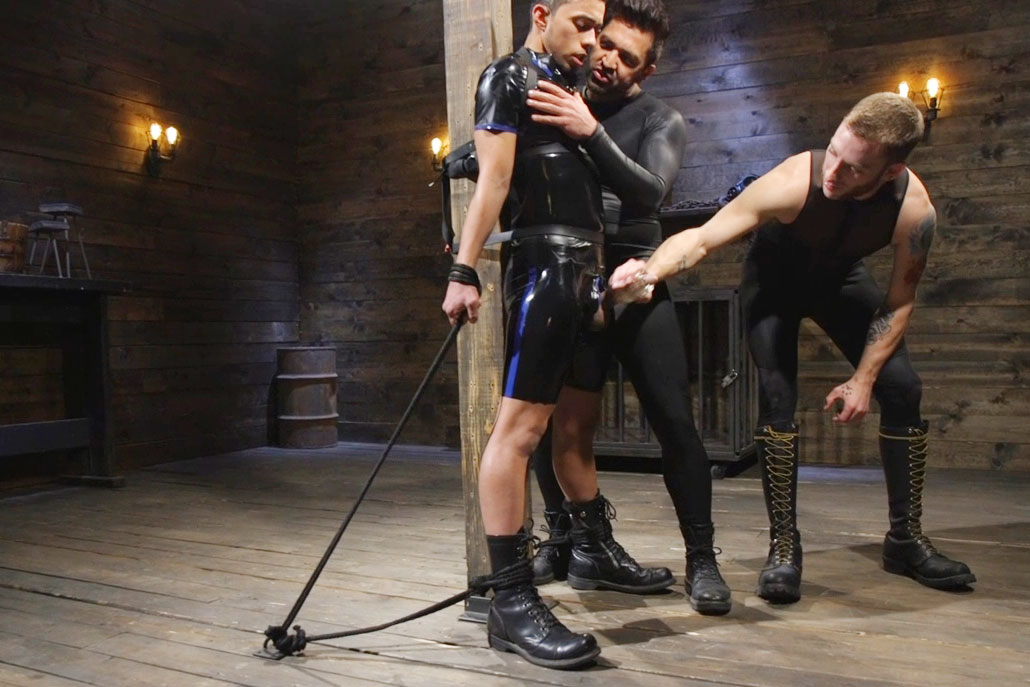 New to KinkMen, Matt Anthony’s got a fresh face and a thick massive cock, desperate to get fuckin’ worked. He’s a bit nervous on his first shoot for Kink, but that nervousness disappears the moment he’s tied up, gagged and blindfolded. Matt is bound to a post with his head fully wrapped. He can’t see a thing as Sebastian and Dominic descend on him. They tease his cock and nips while he struggles. His vision and much of his hearing is blocked, so all he can sense is the bondage holding him in place, and the hands and mouths on his insanely hard cock. Dominic and Sebastian torment him, jerking his dick, sliding it into their mouths, getting it wet and dripping. They slide a jackoff toy over it, which barely fits around Matt’s thick fuckin’ tool. They jerk him and work him, bringing him to the edge again and again, as that giant cock pulses and throbs. They eventually turn Matt around and tie him up so they can get as his tight, smooth, hairless ass. Dominic slides his fingers into his hole while Sebastian sucks that huge dick, pushing Matt to the edge repeatedly. They push a vibrating dildo into his hungry hole, and keep jerking him til he gets closer and closer. Finally, Dominic cracks out the jackoff toy again and fucks Matt’s thick cock with it until he cums. Matt unleashes a huge load, hitting the post and splattering the floor in front of him.