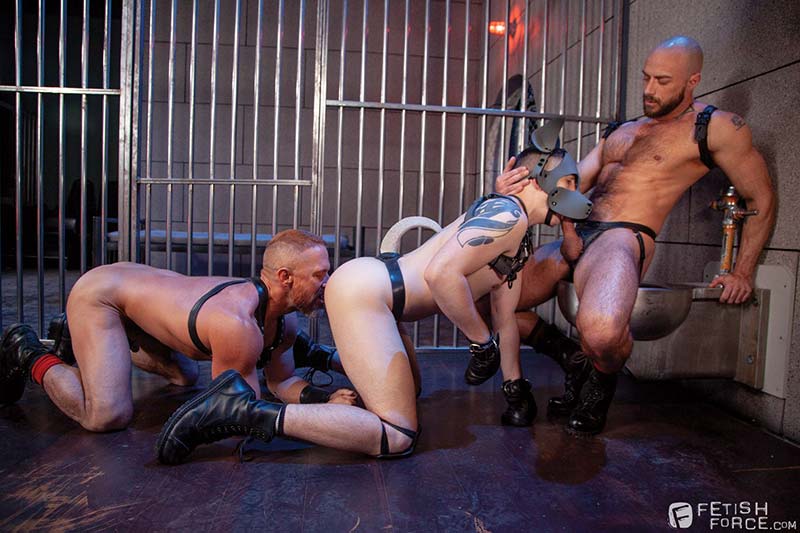 Description:
Tyler Rush is in full pup gear and locked in a cage. His masters Dirk Caber and Jessie Colter taunt the pup from outside the cell. With no one looking, Jessie and Dirk sneak into the cell and let the pup out of his cage. Down on all fours like a good little pup, Tyler bounces between the cocks wagging in his face. Jessie and Dirk split up on opposite ends of the cell and play a quick game of keep the cock away from the pup until they Tyler ends up servicing both of their bones. Dirk wants a taste of the pups ass and bends him over to open his hole with his tongue while Tyler keeps slurping down Jessie’s swollen cock. With Jessie fucking the pup’s mouth, Dirk stands up and mounts Tyler from behind making him howl in pleasure. Pup Tyler keeps wagging his tail as he’s being filled from each end. Dirk grabs onto the pups tail and keeps pounding him doggy-style while Jessie holds Tyler’s cheeks apart while still fucking his face. Eager to please his masters, Pup Tyler takes every powerful thrust from Dirk’s meat until he pulls out and drenches the pup’s hole in thick ropes of cum. To finish it off, Jessie reaches back and scoops up Dirk’s load and feeds it to the pup to lick up.