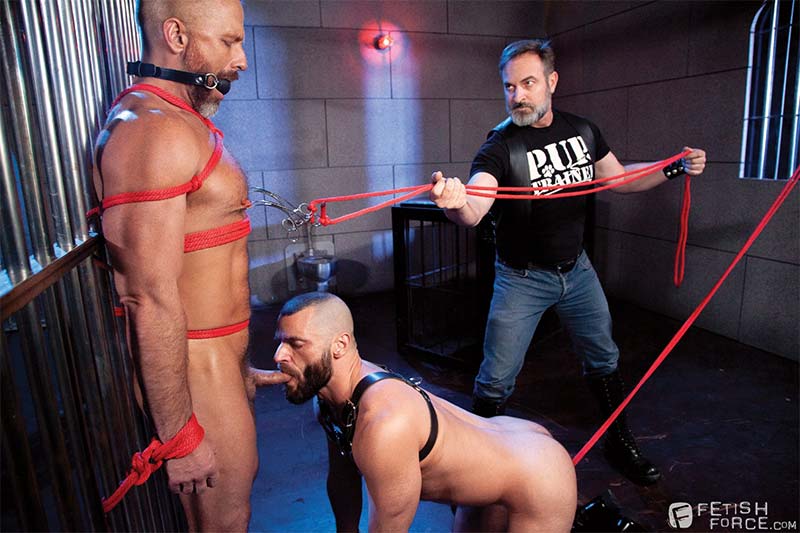 Description:
Kristofer Weston discovers Dirk Caber crating Jake Morgan and isn’t happy about catching Dirk playing with his pup. Kristofer has Dirk strip down and restrains him as he commands his pup to lick Dirk’s bone. The pup does as he’s told and gets to work sucking Dirk’s rock-hard cock. Jake gets Dirk’s rod nice and wet with his pup mouth and takes the stud down his open throat. Jake continues edging Dirk as his master instructed until he can no longer hold off. Kristofer won’t let Dirk release just yet and instructs Dirk to hold back his load. ‘Please, Sir, I need to cum!’ Dirk begs, but Kristofer holds on to his authority. The pup’s master makes Jake continue sucking and edging Dirk as punishment for playing with the pup without his master’s permission. Finally, after a long, bone-sucking session, Kristofer relents and lets Dirk blast his load. Jakes works Dirk’s raging hard-on with his mouth and hands until Dirk cums all over the floor. Kristofer puts Jake back in his cage and scolds Dirk one last time for going behind his back. ‘Next time it will be a flogging,’ Kristofer warns Dirk, and leaves him tied up with Jake locked in his crate nearby.