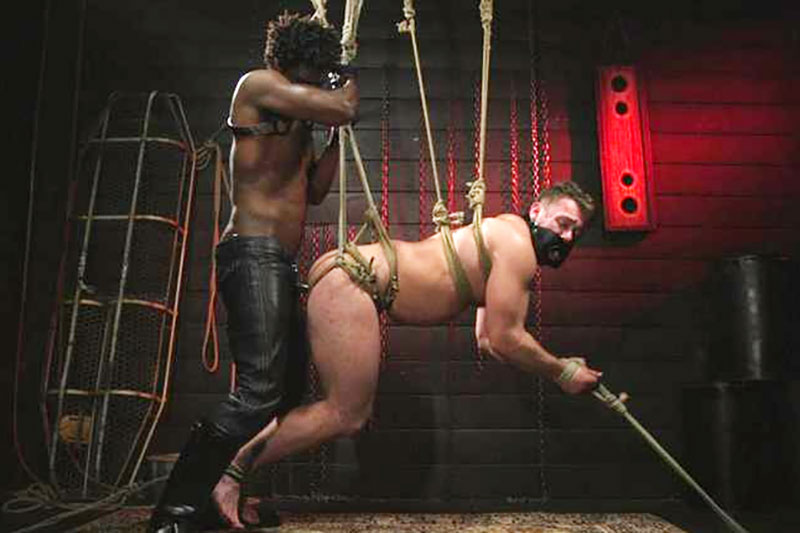 Description:
Hot and hunky Dom Devin Trez has a voracious appetite for Blaze Austin’s ass. Leather clad Trez has Blaze on his knees in a dark dungeon donning a leather collar and cuffs and he is warming him up for some hardcore corporeal and ass pounding action. Devin licks and sucks Austin’s mouth and makes him worship his leather gloves. Trez pinches Austins nipples, pounds his chest, slaps his hard dick and Blaze bends over backwards to let his master have his way. Then on all fours Blaze gets an intense spanking on his ass making him wince and moan and want come cock buried deep in his asshole. Now Blaze is all rigged up for suspension but before his ascension Devin teases and paddles his butt turning it redhot making Blaze squirm and howl. Devin spreads Austins ass open checking out the goods to see if his hole is ready for the big cock he is going to cram in that tight little hole. In his sexy leather pants Trez rubs his crotch all over Blaze’s face and mouth-gag making him hot and desperate for the cock treasure that awaits inside those trousers. Trez finally reveals his big cock to his slut slave but wonâ€™t let him taste it until later…Next with Blaze in full suspension Mr. Trez and his big hard dick have a fuck party inside Blaze Austins ass. Trez pounds his ass out while poor little Blaze takes it like a good slut bouncing back and forth in mid air. Finally Blaze is standing upright with arms tied to the ceiling and full body exposed and vulnerable to the torment that Devin will administer. Its time to go to Flogger town and what a trip it is when Blaze gets his ass and belly whipped over and over again until he is wailing in pain but he keeps taking it until Mr Trez turns that pain into pleasure when he fucks Blaze the slaves ass again. Devin chokes Austin’s neck, fucks him and bites him giving him all kinds of wild sensations until finally Devin unties him and lets Blaze suck his dick. Mr. Trez shoots a fuck load gallon of hot cum all over Austins face and then lets Blaze jack off onto his boots and lick it all up. Good Slut.