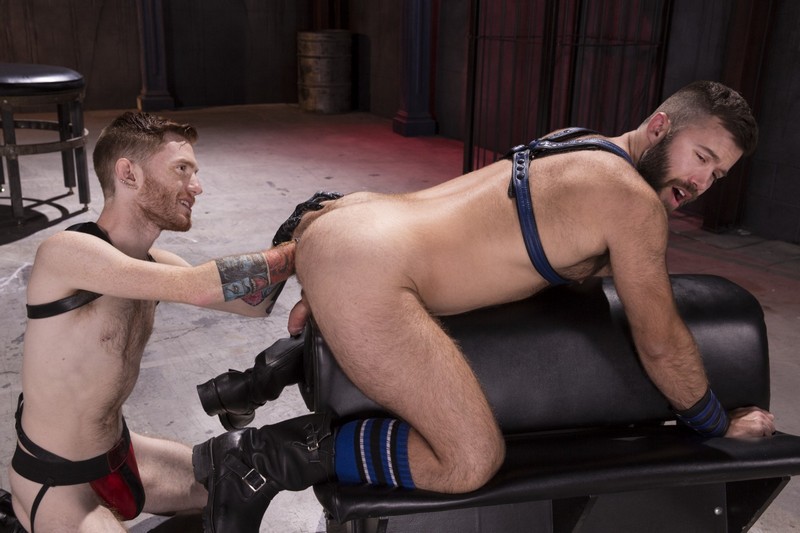 Deep in the dark dungeon, ginger stud Seamus O’Reilly goes down on furry hunk Gage Lennox. Seamus gets Gage good and hard, then bends him over to lube up Gage’s hole with spit. Gage reaches back and presses Seamus’ face deeper into his hairy ass. Parting Gage’s fuzzy cheeks, Seamus says, ‘We’re gonna have it gaping! You like that don’t you, fuckin’ pig!’ Gage replies with enthusiastic grunts and moans; he’s begging to get his hole punched, and Seamus is eager to oblige. Pulling on his black gloves and lubing up his hands, Seamus expertly burrows his fist into Gage’s ass. Gage wants it deeper, faster, harder, and Seamus pushes him to his limits. Gripping Gage’s muscle ring, Seamus spreads it open and reveals Gage’s bright, red guts. Seamus then rests his elbow on the edge of the fuck bench, and Gage lowers himself down, using his body weight to push Seamus in as deep as possible. Rolling onto his back, Seamus proceeds to wreck Gage’s hole, delivering an unbelievably intense sensation to the perfect spot to make Gage lose control. ‘Fuck, you’re gonna make me cum!’ says Gage. His grunts and moans become more and more intense until he climaxes, coating his furry torso with cum. ‘Fucking spent!’ explains Gage, gasping for breath after his massive orgasm.