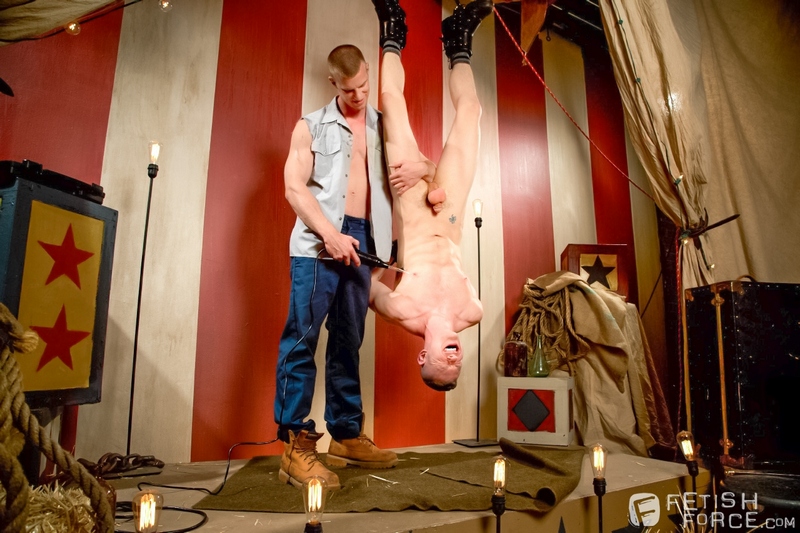 Blake Daniels and Blue Bailey are smooth and streamlined. Blake is clothed but his sleeveless shirt reveals impressive biceps. He hoists Blue skyward by his ankles, courtesy of a block and tackle. Blue is naked, with his hands fettered behind him. The view is dominated by his huge nuts. Blake grins fiendishly as he runs a hand over Blue’s pale white torso with a smattering of dark hair. Blue’s stamina is about to be tested: Blake is holding an electro-wand that administers shocks. It buzzes and glows like a light saber when Blake presses the trigger. You can see small bursts of electricity jump from the tip of the wand to Blue’s skin. Blue flinches; his body arcs. Blake selects a new attachment, one with a curved tip. When he touches it to Blue’s scrotum, Blue practically flies through the air. His abs get a workout from the twisting and lurching. Then one final toy. It has a short, pointed tip. This one is used on Blue’s nuts and nipples, and you can see him clench his jaw in pain and in pleasure as the filaments of electricity leap to his most tender skin. Blake puts the toys away and soothes the hurt with his tongue, then rewards Blue for being a good boy slow and thorough edging to orgasm.